Bringing photography to life with poetry

Are pictures really worth a thousand words? Or are words and pictures necessary bedfellows?

With some time to spare before a rugby match in Bath last Saturday, I suggested that the family and I take a look at the Incite photography exhibition at The Victoria Art Gallery. Featuring 75 iconic images that have illustrated dramatic changes in the world; I felt it wasn't to be missed...

I couldn't have been more satisfied that, as an added bonus, our visit coincided with that of some roving reporters - Year 2 students from Bath Spa University’s BA Acting programme who offered explanations of their chosen photos from the exhibition along with poems they felt captured the essence of the images.

Melanie Hughes explained to me why she'd chosen one of the most captivating and unsettling images - Don McCullin's famous Shell Shocked US Marine, The Battle of Hue, Vietnam 1968. She then offered to recite The Hollow Men by TS Elliot. A brief extract of which, here:

"...We are the hollow men
We are the stuffed men
Leaning together
Headpiece filled with straw. Alas!
Our dried voices, when
We whisper together
Are quiet and meaningless
As wind in dry grass
Or rats' feet over broken glass
In our dry cellar... Student, Melanie Hughes next to Don McCullin's image of a shell-shocked US Marine.

It truly gave me goosebumps to stop and stare at the image while listening intently. A brilliant choice; not only because of its depth of meaning but also because of the reference to Kurtz from Joseph Conrad's Heart of Darkness at the start of the poem; a story which famously formed the basis of the epic, Vietnam War film Apocalypse Now. The soldier's emptiness was made more palpable by Melanie's recital. Kristina Rasic next to Henri Huet's image of the body of a US paratrooper killed in action.

Kristina Rasic's choice of Do not stand at my grave and weep to accompany Henri Huet's 1966 image of the body of a US paratrooper killed in action in Vietnam being evacuated by helicopter was equally haunting. The starkly-contrasted image reminded me of a scene from Hacksaw Ridge in which the hero Desmond Doss's rescued, injured body is silhouetted against the sky on a stretcher with almost religious significance. A Christ-like sacrifice? A soul being raised to heaven? The symbolism weighed heavy and Kristina's choice of poem with a sense of the after-life was all the more significant for it. 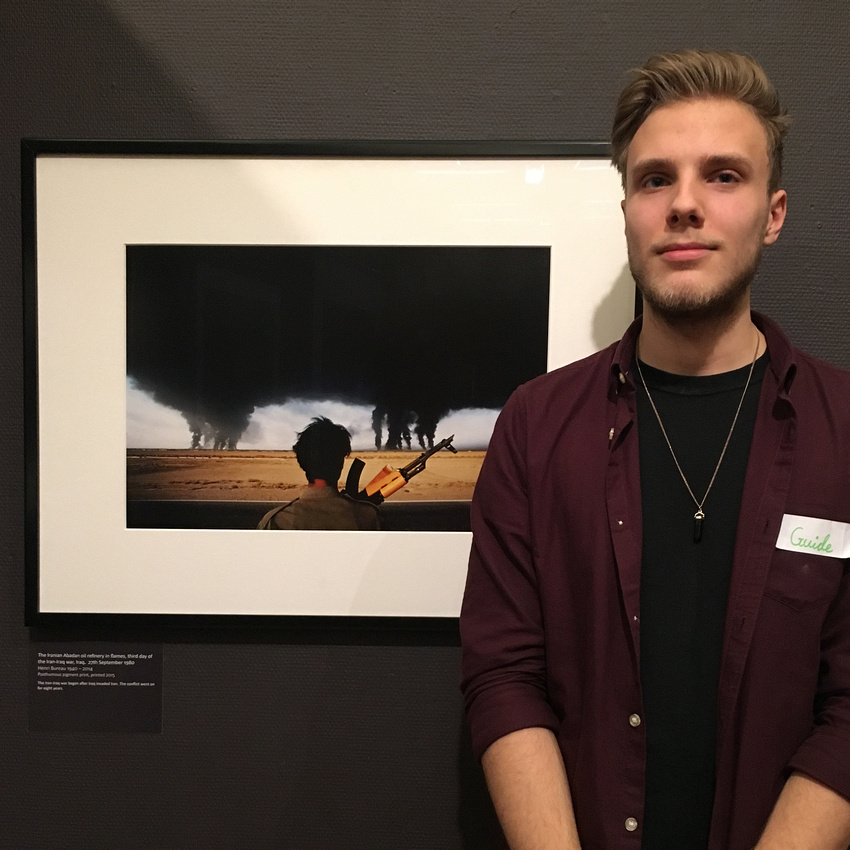 Lazlo Whittaker chose the Lone Soldier to add a narrative to Henri Bureau's apocalyptic photograph of the burning Abadan oil refinery from the Iran-Iraq war in 1980:

I walk with no man, I always walk alone

My soul made of fire and my heart of stone

I have no pain, ignoring all that I feel

With bones of iron and nerves of steel

This is what I portray, fooling you all

My emotions so strong, my defenses so tall

But inside I'm weak, having unsettled war

Not knowing why I battle or what this is for

This war is unending and cease fires are few

No shots are heard but damage is true

What is going on here, what is this for

I'm a lone soldier in a private war

The futility and desperation of war are common, creative themes. I was grateful to these students - whose choice of words made me stop and look longer than I normally would - for making me realise that photography and poetry are still powerful tools and especially when combined in a time when depth and meaning are worryingly and all too frequently lost in a nonsensical age.